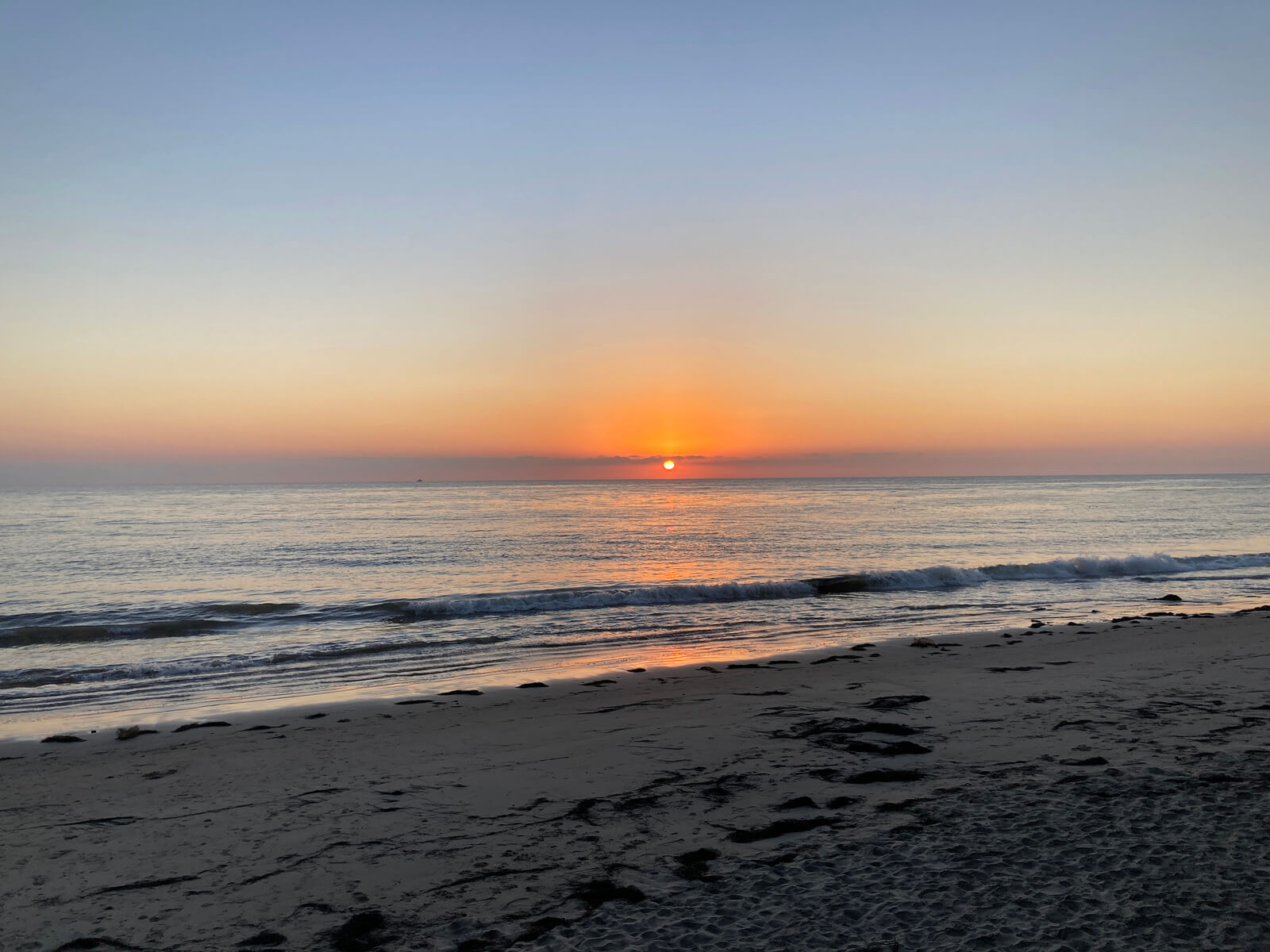 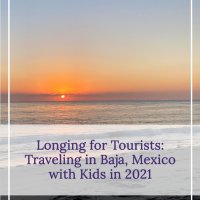 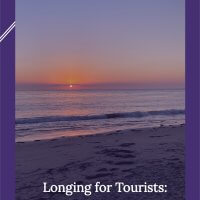 What’s it like to travel in Baja, Mexico with kids right now? Is it a good thing that there are fewer tourists around? I thought it would be, but recently on our family road trip to Baja, Norte Mexico, I found myself longing for other tourists in ways I didn’t expect.

Sure, we all prefer to avoid crowds right now, but turns out, maybe empty plazas are not the ideal either. In some ways, it pushed us to explore farther away from the tourist stalls, faster.

This article may contain affiliate links, which means we may earn a small commission if a reader clicks through and makes a purchase. As an Amazon Associate, we earn from qualifying purchases at no additional cost to you. All our recommendations are our own, and are in no way influenced by any advertiser or commercial initiative.

At the bottom of this post, download a free game of Would You Rather: World Edition to play on your next road trip!

I had visions of traveling just as the pandemic lifted, with few other tourists in sight, and no lines for anything. We would waltz along cobblestoned streets, no one in our way, with no lines at museums, or to enter historic ruins. It sounded fantastic, after all, no one likes crowds, right?

I was wrong. On our recent family road trip from Los Angeles to Ensenada, Mexico I found myself missing the other tourists. A cruise ship sat quietly in port, but we only encountered one passenger, chatting as we crossed a street, then parting ways.

It started in Puerto Neuvo, Baja Norte. We checked into our hotel and saw only the hints of other guests. A car parked here or a person walking there. We soon realized most of the rooms around us were under renovation.

The kids loved the playground in the center of the resort and begged to spend more time there. Largely built of painted metal, they created sand catapults with the teeter-totter, climbed on the tire swing, and made up games as they raced through the wooden structures. But no other kids ever came to join in the fun.

Watching them play as the wind picked up, and the sun tried to break through on a blustery mid-60s day in December, we chatted about how much more fun they’d have if there were other kids to play with.

Playgrounds are usually where our kids get their social time. Since we’ve been traveling they’ve become adept at making friends quickly and then starting over when that friend leaves or drifts off to play with someone else. Not here.

Leaving the gated security of the hotel compound, we walked into the center of Puerto Nuevo. A large, modern grocery store sat between the two streets leading to the small town, each one adorned with an arch announcing the entrance to the town. Walking down, we found four cross streets of empty restaurants and quiet shopping stalls.

One by one the vendors stepped out to offer their goods. They were friendly, but with no one else around, it got tiring listening to each restaurant menu, and pleasantly acknowledging every stall owner who implored us to step inside, to see “all the junk I have”.

Puerto Neuvo is known for its “langosta”, a unique preparation of lobster. We chose a restaurant for dinner based on travelers’ reviews we’d read online. Once we arrived, we hoped that it was only the early hour that explained why no one else was there.

How can the food be fresh when they are only serving one table for the evening? Even as we finished up our meal, there were no other guests in sight.

When we moved down the coast to Ensenada, it felt like we were entering a big city. There was a rush of traffic and everyday life buzzing around us. We saw chain stores like Starbucks mixed in with more local businesses.

The map showed a Walmart and a Costco on the outskirts of town. There were traffic lights and crosswalks. We checked in to our hotel and headed for the Malecon to stroll along the seawall.

First, as we approached the Malecon we found only fences. Soon the kids spotted a playground tucked inside the barricades. Eventually, we reached the one main entrance that had been created in the center of the Malecon to facilitate temperature checks and dispense hand sanitizer. We dutifully complied and filed into the central plaza of the Malecon.

Small wooden huts curved around the edge of the plaza, advertising popcorn, and other goodies, but they were shut tight. The water fountain, which was supposed to dance and dazzle us with its colors, was in pieces, a dry hole in the ground.

The playground was closed, with a large banner citing health restrictions. The kids were alarmed, afraid that every playground nearby might therefore be off-limits.

We headed towards the fish market, strolling the pedestrian walkway along the ocean. But again we found ourselves to be the only tourists around. More empty restaurants and vendors, each stepping out, “my turn” they’d playfully say, and try to get us to stop. It was exhausting, always being the center of attention.

We longed for crowds of tourists, so we could blend into the crowd just a little. As we kept moving along down the empty pedestrian walkway, we marveled at how many people must have come through here to fill so many red plastic chairs.

As we strolled down Avenida Adolfo Lopez Mateos, the main tourist shopping street, we were approached by several young girls selling gum, candy, or small toys. Some were as young as 4, E’s age. Their moms and sometimes grandmas were close by, often offering to braid our daughters’ hair.

Our girls quickly learned to respond with a kind “no, gracias”, but I wondered what they were feeling, seeing these kids- their own age and younger- not in school and working to make money for their families.

The Hills of Ensenada

By our third day, we found the streets behind the tourist rows, these avenues teeming with locals heading to the grocery store, the pharmacy, or the fruit stand. There, we happily squeezed through the crowds, glad for the familiar feel of people going about their lives around us, but taking little notice of us.

As we explored further from downtown, the girls commented on the garbage they saw strewn about the sides of the roads and across the hillsides. We took a horseback ride up into the hills, following rocky trails up past small homes tucked into the land, occasionally attracting the attention of a few local dogs.

The girls watched as an elderly woman set her bag of garbage on fire, plastic and all. As the distinctive smell of burning plastic filled the air, I mentally noted that this is part of why we travel. So that the girls can see how things are different in each place, and hopefully learn to appreciate the good parts of where they come from.

Finding Courage in the Cosmos

After our horseback ride in the hills, we stopped for lunch at Punto en el Cosmos, a restaurant with an alien theme and crazy galaxy-colored milkshakes and lattes. Clearly a popular place for locals celebrating big occasions, we saw families celebrating birthdays, and teens in fancy white dresses.

There was a small playground area outside the restaurant. When our girls were playing there after our meal, a local girl came out to join them. Thrilled to finally have someone to play with, our girls enthusiastically introduced themselves in their best broken Spanish. The local girl giggled at our mistakes, teaching me how to say “purse” in Spanish after I complimented her sequin panda purse.

On playgrounds in the US, our girls had been too shy to attempt to speak Spanish to kids they met who didn’t speak English. Here, through their desperation for connection, they found some courage and learned to communicate.

That evening, we settled ourselves into a café for dinner. It was early evening, our table pressed against large glass windows overlooking the street. We ordered our food surrounded mostly by the chatter of locals enjoying a pre-dinner coffee or cocktail.

The kids peered out the window and spotted Santa Claus in full regalia walking down the street. They watched intently as he strolled into a jewelry store and chatted with the owner. The girls discussed amongst themselves and decided based on his gloves and his belt that he must be the real Santa.

They asked if they should go talk to him, but we suggested they leave him alone, after all, he must be pretty busy this time of year. I was afraid they might find he only spoke Spanish. In a place that often felt foreign to them, Santa was familiar and comforting.

We travel with our girls because we want to expose them to more of the world, but there are a few truths they can wait just a little longer to learn.

There are many places I’d be glad to visit without other tourists. I don’t miss standing in long lines. I’ll happily stroll through the Louvre without having to wait my turn to approach a painting. The museums and the cultural sights are still the same when we visit alone, it’s the interactions with the people that change.

Imagine walking through Times Square without tourists. There would be so much less to absorb. Without the crowds, it would lose a lot of its magic. Its unique energy comes from being a tourist center that draws people from all over. Those crowds, in turn, draw the artists and entertainers.

I’ve wandered through markets in Vietnam, but despite my red hair and pale skin, didn’t feel that I stuck out from all the other tourists passing through. The vendors were so used to the tourists, that my presence was not unusual, granting me the anonymity to browse and observe as I pleased.

There You Have It

During our trip through Baja Norte with kids, I missed that sense of anonymity. I missed the freedom to explore unobserved. I was longing for tourists and other families and the energy they bring.

I’m ready for the buzz of the crowd, where I can tell which restaurant has the best food by where the line forms. Where I can people watch- the fashions and the manners of both the tourists and the locals, without being at the center of it all.

I never thought I’d miss other tourists, but Baja, Mexico showed me I was wrong.

Read Next: Why I Travel- A Love Letter

Don’t Miss: Everything You Need to Know About Driving in Mexico.